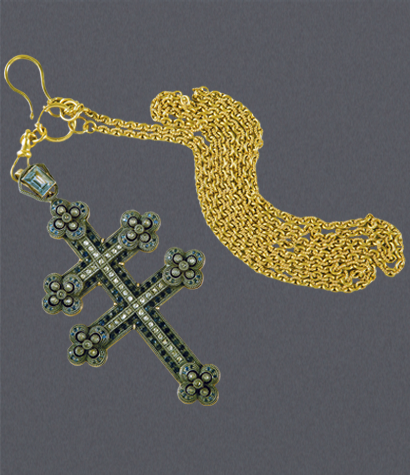 Back to search results
PECTORAL CROSS AND CHAIN

This magnificent pectoral cross with chain, of platinum and gold, and decorated with blue and white stones, is a fine example of the Indian jeweller’s art. Such a cross was worn by bishops, abbots and members of the higher clergy to show their special position, and was often made of precious metals and stones. The pectoral cross is distinguished by its size, and has a long chain to enable it to rest on the chest, thus deriving its name (from the Latin pectoralis, ‘of the chest’). By papal decree, its use became widespread in 14th century Europe.

This pectoral cross is embellished with white stones (zirconium?) surrounded by small alternating blue and white ones graded by size to fit the design, with a large blue stone (sapphire?) at the top in a heraldic frame, all of it set in platinum. Its great elegance is enhanced by the fact that it is of the type known as the patriarchal cross, of Byzantine origin, characterized by two cross-bars. The smaller cross-bar at the top represents the plaque nailed to Jesus’s cross, which bore the inscription ‘Jesus of Nazareth, King of the Jews’. The pectoral cross often incorporates various symbolic designs; here, the blue and white stone embellished quatrefoils at the ends of both vertical and horizontal bars stand for the four gospels. The edges of the cross are finished in the characteristic Indo-Portuguese pearl design.

The long chain to which the cross attached is made of plain and twisted gold-links, and has a hook to secure it to the top of the priest’s cassock. The platinum cross and the gold chain make a pleasing contrast to each other. 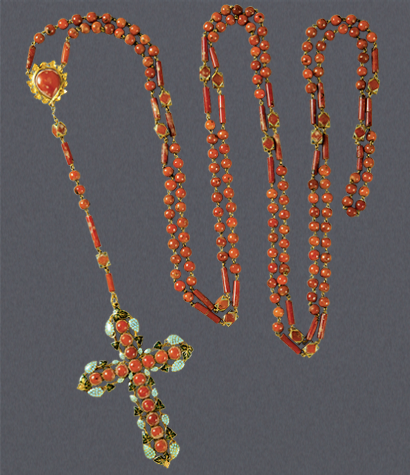