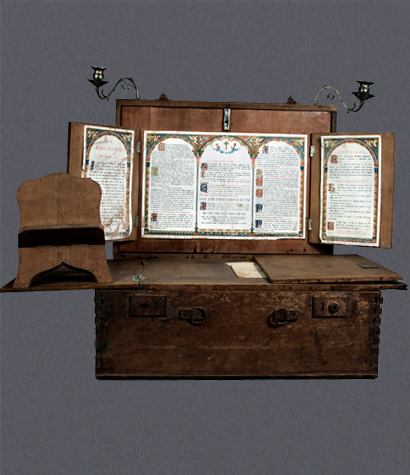 Back to search results
PORTABLE ALTAR

Perhaps the most unusual object in the museum’s collection is this portable altar. Such altars served to create a sacred space for Eucharistic celebration outside the church context to enable the personal devotions of both priests and laity. They also served specific needs of the community, as in priestly visits to the ill or the dying.

Portable altars were in use in early Greek and Byzantine times but proliferated during the 11th and 12th centuries in Europe. Each such object was different, and some could be very ornate. The portable altar shown here has no exterior decoration or painting. It consists of a large rectangular wooden box that opens to create a space that displays sacred texts that could be unfolded beyond the edges of the lid. It has two special brackets to support lights, replacing the customary branched candles. Inside, another section unfolds to form an altar top, with a marble altar stone (symbolic of Christ) in the centre, large enough for the celebration of the Eucharist. The vertical unfolding section carries the customary altar cards with Eucharist-related texts printed in Latin, and images of the sacred heart of Jesus, a sunburst-style monstrance and an anchor on the central card. Beneath the three images is a curving blue design, suggesting sea waves.

The altar box has a functional appearance and plain exterior, its shape rather like a travelling chest, with only the rings that attached the handle, now missing, remaining. The box also has a compartmented drawer used to hold the various liturgical utensils and other appurtenances, such as the gospel book stand visible on the open altar. 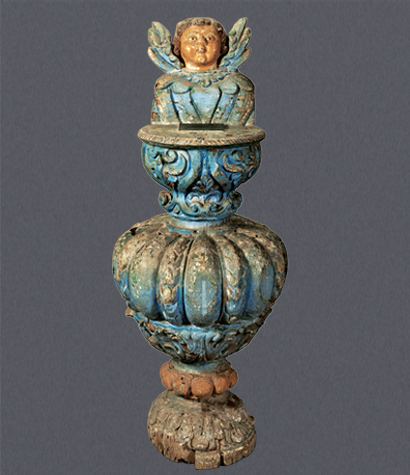 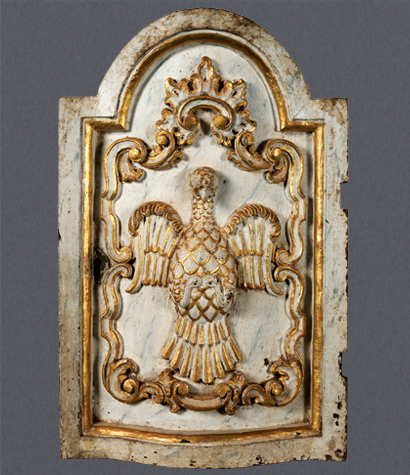